A list based recap of what was said during Fronteers 2014. I was planning to just jot down some small notes, but it turned out there was a lot to write down. If you were at the conference and want to refresh your memory or if you missed it and want to have a taste, here it is.

Links to the presentations will be added as they come available.

It’s gotta be said, Jake Archibald kicked of this conference like a pro. He talked about being nice, the location of fire exists, picking the right fire exit, being nice to fire, fire not being a requirement for a conference, no need to start a fire then. Plus, excuses were made to the people of Holland to make up for British soccer fans pissing the city walls after football matches.

To the first talk!

Heydon runs Ubuntu, which causes a little problem with the projector at first. After things get sorted out he leaves the mouse pointer in middle of the screen, I have to admit, I’ve got problems with that sort of stuff.

Mouse pointer is still in the center of the screen, how can you work like this Heydon, my god!

A very dramatic quote from a developer out there.

I never considered wether class ‘left’ or ‘right’ was semantic or not, but I suppose it is not. I feel like my world is falling around me.

I wonder if a blind user understands the concept of a tab. Do we need to communicate the fact that it’s an explicit tab control instead of an on-page index? 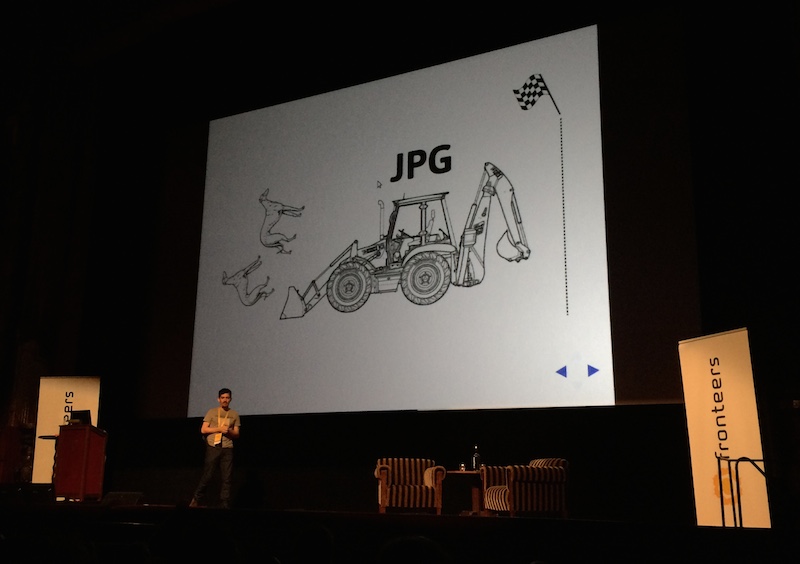 Web animations & parallax make people with vestibular issues sick! The only way they can turn them off is to disable CSS & JavaScript. #a11y 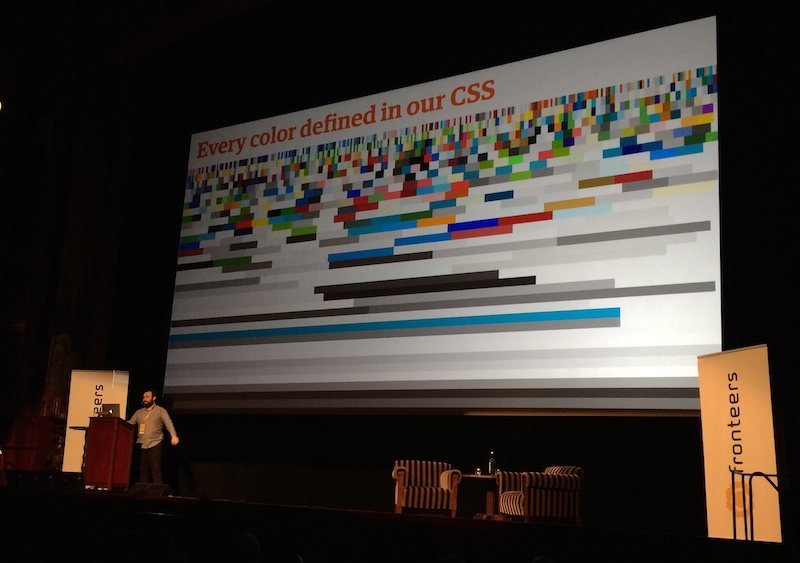 Some really great advice on how to regain control of your codebase.

Do we need to write markup? - Nathan Ford

Jake is a Progressive Enhancement guy so he informs Nathan he’ll shoot him in the face if things get too ugly.

I’m glad to report that Nathan survived the talk without getting shot.

A talk about all sorts of bugs encountered when doing async client server communication.

Everyone is in a state of joy.

By this point, you can hear people sobbing.

State of the Animation 2014 - Rachel Nabors

If you want to go full Michael Bay on your visitors, wrap your site in a blink tag.

Rachel speaks the words “blink” and “tag”, next thing you know, full system failure. A couple of minutes later we’re back on track!

Some great consumer insights and tips on how to work with animation as a team.

Gaming in the browser - various speakers

As someone who build a game as well, I can advice you to do this, it’s an awesome adventure. You’ll learn a lot about code and interaction patterns. Also, you can tell people you’re a game developer, that rings bells.

I’ve personally played around with Phaser, it’s very good, has a lot of ways to create various kinds of games out of the box. Also lot’s of example projects, which will come in handy if you’ve never attempted to create a game before.

If you do plan to write something big, tell friends and family you’re building a game. They’ll keep asking you how it’s coming along, game development is something a lot of people find very interesting I find. 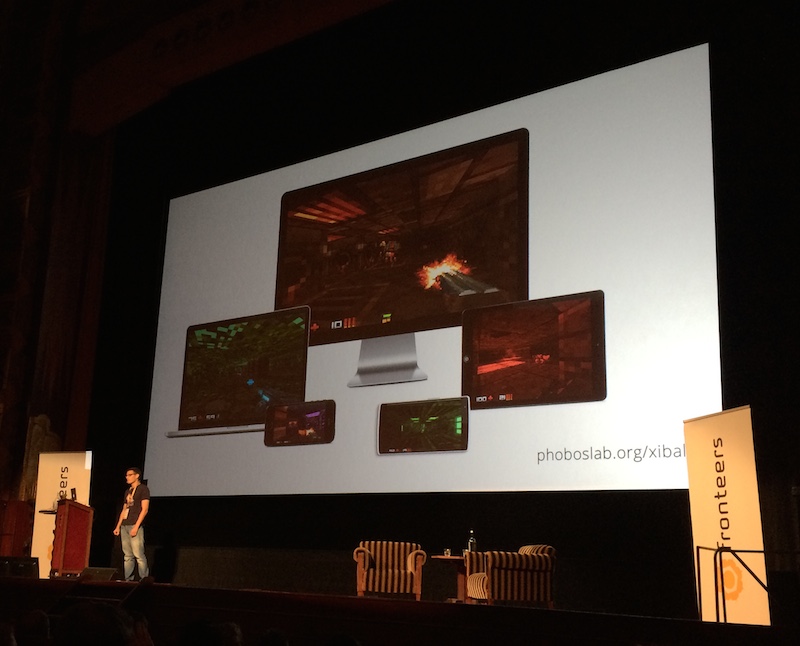 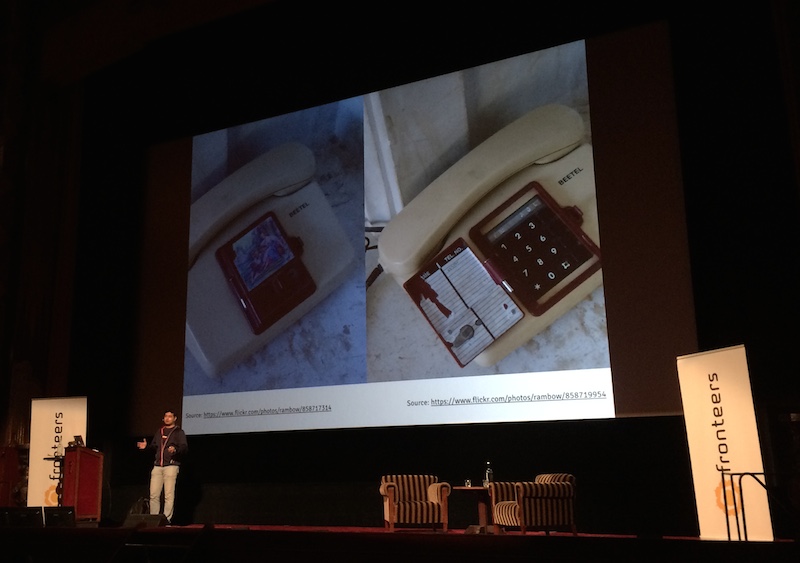 Maybe in a decade or so we’ll be more lucky.

It’s a bit tricky though as javascript is required for syncing. Still we could store content offline with app cache and layer on server syncing and certain interaction patterns as an enrichment.

And that’s it for day one. A great start to a great conference.

if HP knew what HP knows we would be 3 times more profitable. 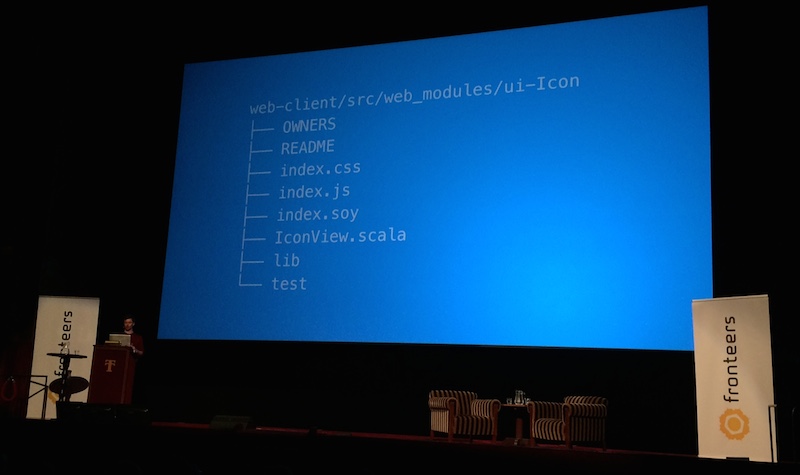 By this point, I’ve given up taking notes, there’s just too much juice in this presentation to keep up. The slides are really extensive luckily.

Sara shares a lot of in-depth information on how to setup animations in the various techniques described. If you’re wondering how to animate something, anything, in someway, in SVG, watch this presentation.

Sara is going to do SVG performance tests and will be sharing those in the near future.

I’ve never learned so much web things in such a short timespan.

This is the web platform - Paul Kinlan 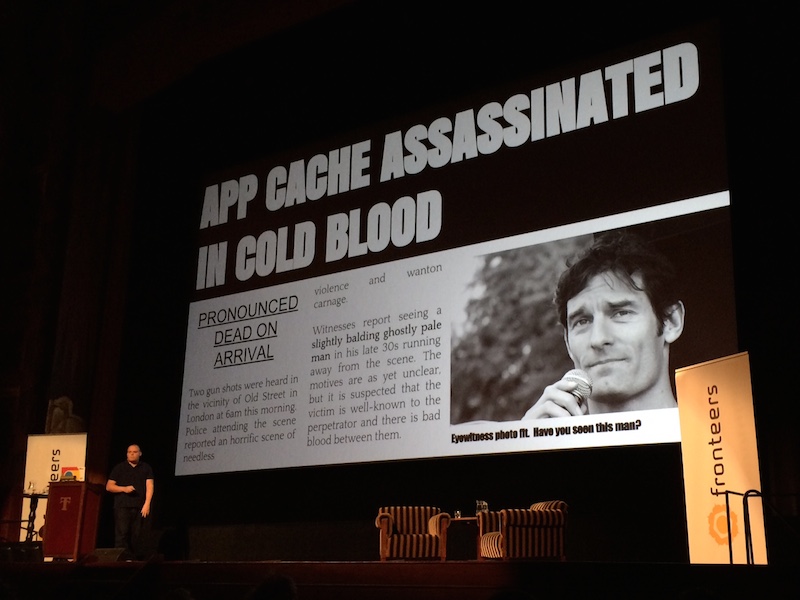 At this point, Paul takes a small moment to try and burn his retinas with his laser pointer.

Excellent talk, great insights, some stuff we all should be doing right now.

A really insightful and amusing talk.

Kyle immediately drops in the lounge area, kicks of his shoes and has them deported of the stage.

Kyle is demoing various javascript constructs that could be solved with these macros.

If you’re fighting with JavaScript, who isn’t, this talk is for you.

Scaling up and down: evolving your testing strategies - Pete Hunt

The raffle goes horribly wrong and shows all signs of a failing JavaScript app. Various undefined values show up, Jake, tries to salvage the situation by checking if “undefined” might be a very common name in the Netherlands. 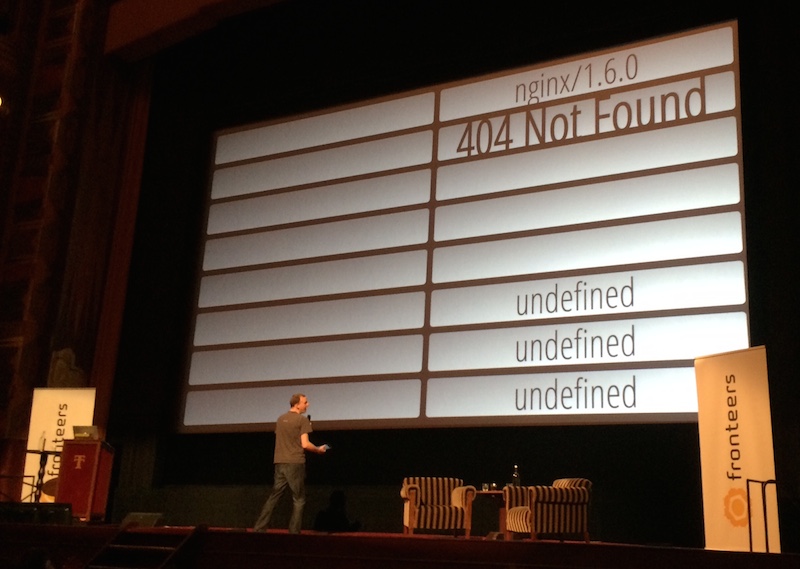 If you want to know when you should be testing what using which test method this is the talk for you.

Pretty dramatic stuff. But such an interesting story when looking at things from a data point of view.

Vivid, imaginative and almost relaxing talk. The relaxing part could also originate from the fact that this was the last talk of the day. 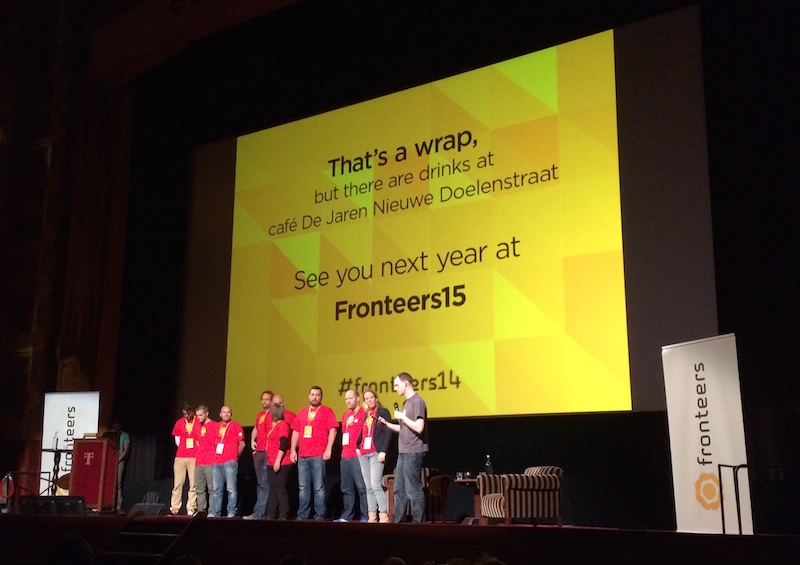 That’s it, Fronteers 2014, what a fantastic conference this was. Great food, great speakers, a great venue and above all, great people.